Top 5 VPN in the world with details information. 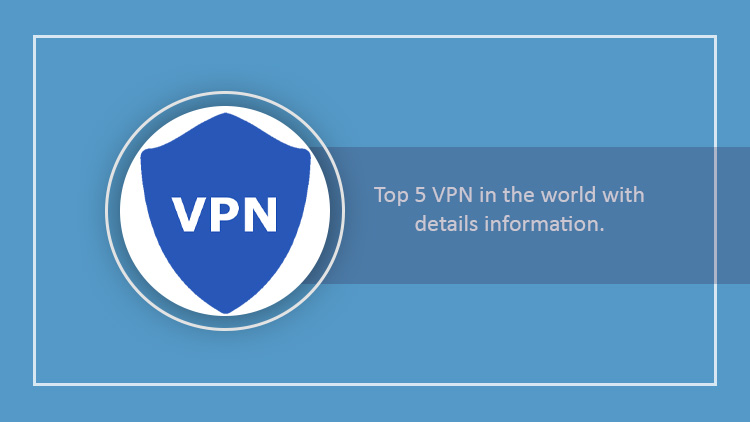 Virtual private networks are a great way to both protect yourself online, while also unlocking streaming content from all over the world. Basically, VPNs are a great double whammy in that they offer both security and entertainment, and we recommend everybody use one when going online. We’ve divided this blog into two parts, with the first being a general rundown of our five top picks, and the second part going into more detail on both providers and our criteria. Hopefully, this will help you pick the perfect VPN for you. However, if you need some more detail on anything I’ll discuss here, I will link to our main article in the description below which offers plenty of links to related subjects as well as going into the nitty-gritty of everything VPN.

Express VPN: With all our criteria in mind, we nominate Express VPN as the best VPN out there for 2020. It’s been in our top spot ever since we started reviewing VPNs at NanoTech 365 about Two years ago and for good reason. Besides being great for streaming and having good protection, it has a cast-iron privacy policy, fantastic speeds, and is extremely easy to use. It is, however, quite expensive, a major con for many people.

Nord VPN: Hot on Express’ heels comes NordVPN, which offers about the same level of protection and streaming comfort, but falls a bit short in the speed department, being a tad inconsistent compared to most other providers. It wins, however, in the price department, and also offers a better torrenting experience, making it jump to the first spot for people looking for a budget option. If you sign up for 3 years the monthly price goes down to under 3 dollars per month.

Cyber Ghost: Third on our list is CyberGhost, which offers a great overall product much like Nord and Express do but falls yet another small step behind. That said, it’s cheaper again than Nord, so it may be the perfect choice for you, especially if you’re in Europe where most of its servers are located.

Vypr VPN: Fourth on our list is VyprVPN, which actually does a few unique things when it comes to security with its Chameleon protocol, but fails when it comes to streaming. However, at sixty dollars for a two-year sub, it’s the cheapest VPN out there and has managed to dethrone our next and last pick as the best deal in the VPN market.

PIA: Last is Private Internet Access or PIA for short. It's been around for a very long time now but has aged very well. We like PIA mainly because no other quality service offers such a cheap yearly plan while staying secure. However, it’s not great for streaming and its two-year plan is 70 bucks. Okay, so that’s our quick top 5.

But, you may wonder, how did we establish this ranking? Well, over the years our team has gotten pretty good at gauging the worth of using our set criteria. However, for the sake of not making this blog while giving our editorial process away in the meantime, we'll just give you a rundown here so you can make your own judgment. As I said in the introduction the two main criteria when choosing a VPN are security and streaming. You can choose which one is the most important for you, or even both, but we try to treat them equally and derive our other criteria from there.

When it comes to protection, you generally want a VPN that uses the Open VPN protocol and AES-256 encryption. There are obviously other options out there, and most VPNs will let you change them, but we like those two options as a baseline. Also important is that a VPN doesn’t leak your location, and none of these five does. As for streaming, it’s getting harder and harder to get through the blocks set up by Netflix Hulu and Amazon, but Express, Nord and CyberGhost all do a decent job of it. While you will be forced to switch servers regularly, you’ll still be able to watch what you want, where and when you want it without any real trouble. Simply put, you can say bye-bye to the proxy error from now on. We’ve published other blog on the nasty proxy error specifically for Netflix which you can check out in the card above here.

However, another important criterion related to streaming is speed. After all, no matter how well a VPN punches through the Netflix block, if you end up watching the buffering circle for most of the time, it’s useless. We’re always checking our favourite VPNs’ speed at Cloud wards, and as you can see here, Express VPN is a clear winner, with PIA hot on its heels. Cyber Ghost and Viper are a bit more middle of the road, but it works out fine in the end. NordVPN is also great, but we don’t include it in our rankings as it very much depends on the server you connect to. Some are lightning-fast, while others are as slow as molasses. Luck seems to be the keyword, here, and so we have a hard time recommending Nord for its speeds.

Next up is something that we call user-friendliness, which is the most subjective criterion we have. We really like Express here because all it is one big button to start and stop it, plus a smaller button that lets you choose the location. It’s super basic but gets the job done. On the other end of the spectrum, you have the much flashier Nord, which offers an interactive map as well as a list-based server selection. We like it a bit less, but Nord does have a better settings menu to let you tweak things to your heart’s desire. Cyber Ghost is kind of in the middle here, as is Viper VPN, offering simple apps with windows that fold out if you need a bit more information. PIA is the odd duck in that it only lets you work through a system tray icon, which takes some getting used to.

Now, all of the providers here have great mobile apps for Android and iOS and they work in the same way as their desktop counterparts. So you can browse securely on your iPad while using a public Wi-Fi connection. A related issue is that of customer support which with all five is decent though some are definitely better than others. Express, Nord and Cyber Ghost all have good chat-based support that gets back to you quickly, while PIA’s only works via email and varies a bit. We’ve rarely had trouble, but some of our readers have and reported that in our written reviews on Cloudwards.net.

However, if we had a “best improvement” award, it would go to Viper VPN. Until about a year ago their support was slow to respond, and when they did they were often rude and unhelpful. However, a new wind has been blowing at Golden Frog and lately, things are a lot better, up to the level of any competitor. Lastly, we’d like to talk a bit about privacy policies. Of course, we’d never recommend a service that has a poor track record in this to you, we leave that to others, and you’re safe to go with any of the five providers we’ve mentioned here. Not only have we read through the privacy policies, anybody can do that, but we’ve also gathered as much data as we can from users to see if there were any reports of breaches or other issues.

As far as we can tell, all services deal quickly and efficiently with problems when it comes to security and privacy, and none sell your data to third parties. As I said earlier, we’ve been doing this for a while and we’ve never received a report about any of these five services that stood up under scrutiny. Nord, for example, has suffered from a few small hacks, but the team behind the service was always quick to jump on the issue and fix it. Now, this blog is running a bit long as it is, so I’ll leave it basically to you.

If you want more information on any of this stuff, make sure to check out any of the articles linked below or even just visit nanotech365.com and browse around. Also remember, if you liked this blog, please give us a thumbs up and if you’d like to receive more like it, please subscribe.